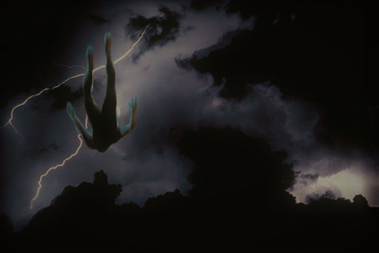 When I sit to write I choke. My hands, not needing an excuse, cramp, tingle and shoot fire through my finger tips as I torture them on these keys.

How can I express what I feel today? If I left his entire page blank it would not be enough to convey the emptiness inside of me.  I’ve lost my best friend. I don’t know if my best friend ever existed, or was just a fragment of my worn out mind that chipped off after one too many blows on the head.

Small wonder that I could conjure such things, and believe them real, damaged as I had become from years of self-exile in the wastelands where the lost wander. It may well have been forty years, dreaming of the promised land. Who can really count the passage of time when every day has become the same and each is as  painful to remember as the last. Despite all this I pressed on, never losing sight of the distant spire in the distance, the one that called my name. My Babel, the tower to Heaven. Though it appeared as a mirage, I never doubted its reality, or the vision of ascending its heights. But when I finally reached that great tower, after toiling for so long, the taste of disappointment did little to quench the thirst on my parched lips. Before me stood not a monument to be envied. What I saw was a crooked and confused mass of stones, twisted and leaning as if a breath would topple it. The work of a madman it seemed, or perhaps the combined work of many sane men who each pursued his own vision regardless of the path his fellow builder had chosen. But it was here, I still believed, on the top of this monstrosity, that I would find my wisdom and restore what I had lost, that almost imperceptible thing I would only be able to name when I had once again made it part of me.

Dutifully I waited in line to ascend, watching as body after body fell from the clouds and smashed across the rocks beneath. And yet toe to heel we stood, waiting for our turn to make this ascent,

I kept trying to climb that ladder, although my fingers were trod upon, and my hands throbbed with the unrelieved tension. I struggled and strained and fought my way to the top, only to be dealt a savage kick to my face as I grasped the final rung.

Down and down I plummeted, and when I landed, it was upon a field of bones. My own bones were shattered, ruined, my arms and legs now made of joints.

Spider-like I spin myself a new ladder and began the upward struggle again. What good could come of this desperate attempt? My arms and legs askew, my feet and hands missing the rungs more often than not. Why could I not see how twisted and wrong my world had become? All around me lay the evidence of those who had fallen before me, some maybe better men than I, but all brought equally low by this, most impossible of challenges.

When love and pain become so deeply entwined that you cannot recognize one without thinking of the other, you have reached the place of no return. I paused, on my ascent, and looked up to witness the ghost of love take the form of a great white bird. Flapping it wings it climbed high above me, until I had to squint my eyes against the sun’s glare to make it out. With a single anguished cry love swooped out of sight, and a moment later the spell was broken. There was only me, and this ladder, the top of which I must reach no matter the cost. But as I began the slow and painful ascent again I find myself pondering a question, the answer to which I fear I know. Was the death-cry of love simply a sub-conscious musing, or had that terrible sound truly burst forth from my throat?